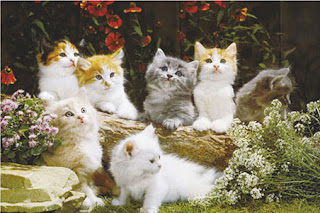 Cats cats cats. I’ve had so many cats. Some were small, some were tall; some were black, and some we killed. That one was an accident. We wrapped him in a slip and buried him over the hill. 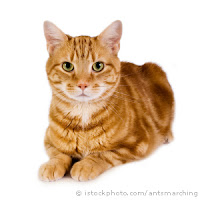 Some were sent away (that was my brother’s fault), and some ran away (that was my fault). Snickers and Crackerjacks were carted off to a "nice farm" because my “brother” had “allergies” that caused a perpetual case of “strep throat,” and the “doctor” said we needed to reduce the “dander” by two-thirds. That meant two of three cats were sent packing with only a light cardigan and engraved flea collar to remember us by. My brother convincingly argued for keeping his cat, Striper. I think some of the premises were, “Striper can jump higher than Crackerjacks,” and the irrefutable, “C’mon, you know he’s the coolest one.” The solo cat act worked wonders for my brother’s health, but then Striper got run over as the car pulled into the garage, which wasn’t good for his health. I hope it wasn’t bereavement-induced suicide :(

Johnny went to college, Striper went to heaven, but I went to my cold, pet-less room. That’s when we visited the humane society to find me another emotional crutch. We picked out a 6 week-old kitten “Zorro”-- and took him home before he was fully equipped to unconditionally love me for me. I faked sick from school for two weeks straight, the whole of which was spent with Zorro nuzzled under my chin, watching Fred Astaire musicals. Then I had to go and lose him on a walk through sheer negligence. Ugh. Still got hardy guilt over that one. For years, I chased black and white cats to compare their markings—but it was never a match. It took me a while to regain self-confidence in my pet-parenting ability. 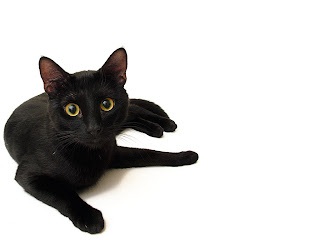 On our next trip to the humane society we discretely failed to mention my carelessness with the last adoptee. So they let us take Simba home. That was in 7th grade, the time when you most need someone to curl up next to you despite your pimples, scrawny frame, and crooked teeth. Simba is still at home, locked in the basement. During clement weather, he lives out his retirement positioned as an elder in the community, selflessly training up the next generation of strays.

And now we have two California cats who can’t stand each other. One is Moses, and one is Zoey. Moses, my brother states indignantly every time he sees him, “Looks like he ate a dog.” Poor Moses. He has some kind of mental disorder that causes him to really suck sometimes. Curls up on your lap, purrs up a storm, then, without provocation or warning, ATTACKS! His strong suits, however, are: eating, sleeping, moaning, and initial friendliness with all mankind. 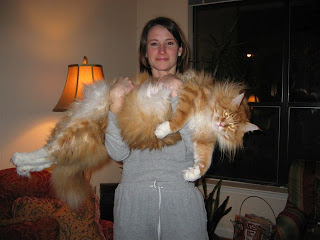 Then we got him Zoey for companionship, but he just tries to rape her all the time. It’s not a good situation. At least twice a day Noah runs after Moses, who is running after Zoey, who is running after chastity, screaming, “NO! NO! NO!” I am training Noah to defend damsels in distress. Zoey is just the sweetest and cutest and sweetest and cutest cat EVER. I LOVE YOU, ZOEY! (and I love you too, Moses. Jesus, help me love Moses more. Amen.) 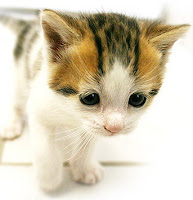