Never before and never since have I more deeply yearned to escape prepubescent society … than at camp. In the summer leading into 8th grade, in a moment of false empowerment, I registered for Adventure Camp. According to the brochure, there was to be caverning, rope courses, and—because it was Christian—spirited chord progressions during the worship services. A couple close friends were going too, so I anticipated an alleviation of the awkward aspects of adolescent association.

The opening assembly, held in the campground’s central chalet, was promising: the head counselor descended through the ceiling on a rope to James Bond music as the other counselors marched in single file raising aloft a gym sock-on-a-stick. They chanted, “Stinky Sock! Stinky Sock!” to the campers’ delighted cheers. They posed rousing rhetorical questions to the eager group: “Who wants to have F-U-N?!?” “Which team is gonna have to smell the STINKY SOCK????”

Then came the “sit still and listen” portion in which an itinerary was listed, ground rules for shower usage detailed. Then an interactive sermonnette was delivered followed by group discussion. All I remember is that in my passionate response to a question about God’s creation of the world, I defined a nebula to illustrate my point, only to be mocked by the speaker and snickered at by the campers. Apparently they were looking for a chapter and verse citation. I froze in hot embarassment. Geeze, Grablatch, who gets all serious about nebulas at Adventure Camp?!?!

Well, to my bunk I went, and in my bunk I stayed. For two days.

Finally, after exhausting my shame and self-pity, after realizing my bunkmates were not curtailing their own adventures to sympathize with the shut-in, and after imagining the outbreak of counselor joy that would surely meet my resurrection, I drew myself up for the repelling excursion planned for the third day. There I was at the top of the rock face, helmeted and harnessed, ready for some adventure. But as I turned around to attempt the first push-off, my foot slipped. I slid down the first six feet against the rock, then just dangled in mid-air. The counselors at the bottom were shouting encouragement to me, but as I looked up to the crowd of peers peering over the edge at me, I started crying and lowered myself down the rest of the way.

Back at camp, I called my parents to pick me up. Over the short course of three days, I had trail-blazed new routes into the deep forests of homesickness and caverned into new lows of poutiness. Just call me Robinson Crusoe. 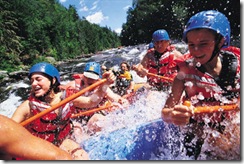 (This was supposed to be me having oh so much fun with kindred adventurous spirits.)
Exceeding that camp horror was the Missionette camping trip where I wasn’t allowed to go home early. The Flowers and Stars, with their sleeping bags and Bibles, piled into several church vans for a weekend camping trip to some godforsaken “meadow” about an hour away. I can’t remember why I went, since I’m sure I had no desire to.

While the older Stars were helping the Counselors set up the tents in a circle, a few Daisies sat down on some sunny rocks to hear a Primrose relay a “really good” story. The meadowlarks were singing, the maple trees were waving, and the Daisies’ eyes were dancing as she told the tale of “Bloody Mary:” the demon-possessed woman who turned around three times in front of a mirror chanting her name, only to be strangled by a ghost on the third revolution.

Well, that sufficiently freaked me out to the point of insomnia. The Star assigned to our tent advised me to sleep in the counselor tent, a.k.a. the boring middle-aged women’s tent. I ran through the dry grass in the twilight and stood at their tent, somewhat afraid to enter and somewhat afraid not to. You can’t really knock on a tent door, so I cleared my throat and whispered, “Umm, Miss Melba?” “Just a moment,” was the reply. As I waited there for at least a minute, I scanned the campsite for any sign of Blood Mary. As the flap unzipped, I stepped inside to behold four perfectly placed air mattresses on which slept three Counselors in crisp K-Mart jogging suits. The tent smelled vaguely of dryer sheets and wrinkle cream. I did not palpably sense the presence of the Holy Spirit.

As I lay squeezed into the corner, staring up at the tent stitching, I heard muffled squeals and Amy Grant choruses drifting across the meadow. No matter what I did to fall asleep, Bloody Mary kept turning around in my mind. I’d occasionally look over at the lightly snoring Counselors for a reality check, only to envision their permed heads roll toward me with demon faces. Let me assure you, the only thing scarier than a demon, is a demon in wrinkle cream.

After breakfast the next morning, everyone was going on a Scavenger Hunt. I didn’t feel like it, so I put my head down on the picnic table we ate at and closed my eyes. Dishes were clattering in the background as some of the girls on clean-up duty bustled about. Soon after, someone sat down next to me. Without looking up I just knew it was my Best Friend. She began to do my hair, and the thought that she, the life of every party, was willing to stay with me in my anxiety instead of scavenging made me start to cry.

My therapist tells me that my pathological pattern over the years was to have a Best Friend, but no friends little f. For instance, I’d only share my Oatmeal Pies with Her, only throw the wiffle ball in banana scoopers with Her, only dissect the cow brain with Her. My life was wrapped up in our friendship, and I was devastated when it faltered or failed. Apparently this Best Friend/no friends condition stems from something to do with “my childhood,” “my frontal lobe,” and/or “my general misperception of reality.”

When I finally lifted my head, I saw that the little girl smiling at me was the chubby Primrose with a lisp who smelled more of fertilizer than of flower.

“Where’s my Best Friend?” I asked.
She shrugged and guessed she was on the Scavenger Hunt.

With this new disappointment added to the demon-trauma and sequestering into the boring tent, my last petal fell to the ground. That’s when I started my entreaties to go home. The Counselors said that there was no one to take me and no phones; but I was not deterred. I knew that a Dad was coming to camp that night to accompany our campfire songs with guitar.

So while the other girls were anticipating S’mores and silly choreography, I was strategizing how to get the Dad to drive my getaway vehicle. I employed every manipulative weapon available to a creative and desperate youth: I cried. I tried the silent treatment. I offered a bribe. I faked sick. I flattered his daughter’s musicality and propensity to share.

It all failed. He said he didn’t have my parents’ permission.
I was trapped. Thereafter I counted down the hours until our departure, as a prisoner scratches tick marks on his cell wall.

While I did earn my Camping Badge from the experience, I couldn’t look in a mirror without a shudder for years afterward; and even though I’m confident now that I could … I just don’t want to. The experience also led me to consider a career in Camp Rescuing where I’d swoop in to save emotionally and socially stranded girls and drive them somewhere safe, somewhere with books. And basketballs.