And I don’t mean mini Girl Scouts. I mean the brownies laced with laxatives awaiting me at Becky’s 4th grade birthday party. The stupid party was held on a Saturday afternoon at the Roll-R-Skate next to Long John Silvers. And it was the only time that, in hindsight, I was grateful to be grounded. Little did my mom suspect that her punishment would serendipitously prevent double-fudge dysentery and eternal social shame. 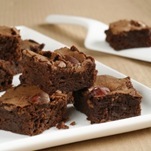 I can still picture Damon Krieger, the following Monday, thumbs in his pockets with all the pointed fingernails hanging out, leaning on the cafeteria’s vending machine, cackling the never-executed plan to one of the borderline dorks.

(These gray-zone dorks were captive audiences for bullies since they cherished a hope for upward social mobility; confirmed dorks, in contrast, had given up--or simply never held--such aspirations. Instead they formed ill-fitting-pants-and-chapped-lip enclaves, somewhat succored by their superior test scores.)

Damon masterminded the plan not only because his brother’s “herb” brownies inspired the idea, but also because he was mean. As far as I know, he didn’t have any good reason to dislike me, but then, you don’t really need one at that age. Other kids went along with him, probably because they were vaguely afraid of him … and vaguely sick of me.

You see, in 3rd grade the teacher wrote on my report card what the kids already knew: “Grablatch gets in ‘a mood’ sometimes.” Seeing a big, fat ‘B’ on my report card would have been more welcome than that stinging comment (taken not as teacherly concern but as accusation). It stung because it was true: any little disappointment or injury set my lip into a pout and sent my head shrinking into my turtleneck … for up to a day at a time. No one hated me being in ‘a mood’ more than me, but no one, including me, seemed to know how to get me out. I refused to re-emerge even under the coaxing of classmates. When their cajoling became ineffective and annoying, it was abandoned; they turned instead to nicknames.

As I was running up and down the court in gym class basketball, a pack of wolves crowned me with mine. From the sidelines they chanted, “Sullen! Sullen! Sullen!” I was not impressed by their application of this week’s vocabulary word. I ran and shot and passed all the harder. With every dribble, I am NOT sullen! Shut up! I hate you! pounded in my head. Embarrassed, angry tears mixed with sweat to sting my eyes. As if even a slam dunk would have silenced them. 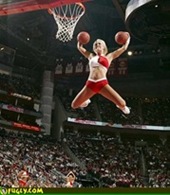 It was about a year after the Brownie Conspiracy that Damon and I had another run-in. While running laps in gym class, he repeatedly tramped on the backs of my Air Jordans, making me stumble. I tried zig-zagging to lose him; I glared into his narrow eyes; I threatened to tell the gym teacher. And he laughed. Relentlessly he trod, until the upper tore from the sole. That. Did. It.

I shook my mane and roared from the depths of my soul.
Everything stood still: The kids stopped dead. The air held its breath.
I about-faced, ears flattened and claws unsheathed.
Damon stopped laughing.
I took a few deliberate steps toward him.
He took a few shocked steps backward.
I growled low in my chest. And lunged--

Now he was scurrying this way and that. Now he was begging me to stop it. The hunt flashed across the mirrors of our classmates’ eyes.

The prey was brought down at center court. I ripped into his T-shirt, biting and tearing at a blur of limbs and pointed fingernails. Enveloped in a haze of Heat and Hate, I cried and yelled at him, as he cried and yelled for help.

From his office in the corner of the gym, where he was counting kickballs and cones, the teacher finally smelled the blood and heard the roars. Under his bullish bulk, he waddled into the fray, huffing and puffing and whistle-blowing.

I didn’t even look up. So the teacher pried me off Damon with my legs still kicking.

I like to imagine that Damon crumpled under his wounded ego. That he lay on the court with shredded shirt and no shred of dignity. But I think he just stood there, smirking and finger-twirling at his temple to indicate that I was a psycho.

I did not recover so effortlessly--my mind was still submerged in adrenaline. All I could do was sit on the sideline with my head between my knees, shaken by leftover sobs.

Suddenly the Principal appeared. He had been strolling his scholastic castle, surveying his domain--would he find subjects to commend, warn, or discipline?-- until he heard our unsportsmanlike conduct. He strode into the gruesome scene and demanded an account from the gym teacher. But the teacher hadn’t succeeded in getting the story out of us yet. When the Principal turned to me and Damon for an explanation, he found our language limited to grunts and shrugs. So he extended his scepter: Damon shall be transported to the Principal’s office post haste for further questioning, but Grablatch shall first be escorted to the girls’ bathroom “to put some water on her face.”

After listening to Damon’s defense, the Principal paddled him. After hearing my testimony, I got the “I’m surprised and disappointed in you” talk.

Sadly, the only “lesson” Damon learned from the aggravated assault was to pad his trousers should he be sentenced to another spanking. Although he never stepped on my shoes again, he borrowed freely from his well-stocked arsenal: mocking how I looked while singing in chapel; trading spaces in line to avoid standing near me; telling the bus driver everyone was on when I wasn’t. Teachers--when they caught him--only said his name in a “c’mon” tone and went on about their bulletin boards. Kids--when they heard him--smiled to themselves that Sullen bore the larger target.

The only lesson I learned was to avoid Damon as much as possible, and when I couldn’t, to receive the attacks in a posture of silent hatred. Because, after all, I wouldn’t want to surprise or disappoint anyone again.

No one calls me Sullen anymore, and it’s not because name-calling is now considered immature. It’s because I’m NOT sullen anymore-- I’m Jolly! Jollier, in fact, than a green giant. That has always been the truest thing about me, even when it was clouded over by moodiness. It’s been a thorny process learning how to respond to the Damons and disappointments of life without fighting or flighting into a funk. But I’m confident that were Mrs. Young to update her comments on my 21st grade report card, it might go something like this: “Grablatch has shown vast improvement in managing her emotions. She should get a gumball.”

In the last ten years, I have heard naught of Damon, fueling my spiteful suspicion that he ended up a gas station attendant. The last flakes of my Sullen crust rejoice in this reverie, and from that pitiable place I can muster up only enough goodwill to hope a driver doesn’t drop a cigarette at his pump. But my truest, most cheerful self (whom I call “Angel McGrace-Longsuffering”) prays not only that he has filed his fingernails, but also that his truest self busts through his crust in radiant glory, setting to flight his internal demons. Amen and Amen.