“3 lbs. of ground chuck, please, Mort.”
“Alrighty. We have some nice ground chuck today. What else can I do ya for?”
“That’ll do it.”
“You have a good day, then, young lady.” [slides meat package across the counter.]
“You too, Mort."

This is how my mom carried on with the Wee Store butcher. Sometimes she’d say, “Boneless, skinless chicken breasts, please,” but it was always Mort who commented on the freshness or leanness of the order. She purchased Wee Store meat because it was better quality than the meat at the franchised Shop ‘N Eat, but I think she also liked the Wee Store on account of Mort’s pleasantries. His white apron was stained with blood and he smelled like cold carnage, but his smile was sincere and his beard well-groomed.

Mort was impervious to handling the slabs and chunks of animals. With a plastic-gloved hand he’d thrust his fingers into a big mound of ground meat, pulling out a pretty accurate fistful to put on the scale. I hated the meat that was still bleeding and the things that still looked like the animal—especially the fish heads and chicken feet. Mort didn’t betray a preference.

My mom was checking out one time and I stuck my fingers up a 25 cent candy machine to get a sticky hand that you throw against a window and then pull off and do it again and again until it loses its stickiness from lint and dirt. My hand got trapped and we almost had to call the fire department. My mom was

angry, and I had to apologize to the cashier for trying to steal. I’m glad we weren’t Catholic, because I’d probably have been sent across the street to St. Hildegard's to get in a booth and tell a priest what I did. Instead I got no dessert.
II.
On the way home from work my dad would swing by the Wee Store, and without turning the engine off, would hop out and get a can of Pepsi from the outside vending machine. Not Coke. He hated Coke. If you even misspoke and asked for a sip of his “Coke,” he’d screw up his face in disgust.
There was always a candy bar to go with the Pepsi, and there was always an episode of MacGyver to go with the candy bar. He went through seasons of a preferred candy bar that he’d eat for months at a time to the exclusion of all others, and then one day he’d simply come home with a new one. For a long stretch it was “The Chunky Bar.” The Chunky Bar was a square of milk chocolate with raisins and peanuts. I’d let the chocolate melt in my mouth then spit out the nuts and raisins, which pained my father.

Then there was Zagnut. This was a log of coconut-covered hardened peanut butter dipped in hydrogenated corn oil. Half the fun of a Zagnut was picking it out of your molars.
And who could forget Jujy Fruits? Dad had a jumbo box of them wedged between his driver’s seat and the console. “Hey!” he’d say when he spied me hunting for the red and orange ones. They hardened overnight in the Pennsylvanian cold, so we’d make a fist around them to warm them back to gummy life. Then they’d get flattened between the thumb and forefinger to see who could make it biggest before it tore. I think one time he smushed two together just to win, but he ate it before I could check for a seam.
My dad had a heart attack several years later and only ate beans.
III.
A short run through the woods and down Bell Avenue and I was at Annie’s house. We were exploring in her garage and found, under a blue tarp, an old 10-speed. It was rusty, too big for us, and had a dirty pink seat. She tried getting on, but because the driveway was gravel and she couldn’t touch the ground, we more just stood there laughing at the contraption. After pushing it into the alley behind her house, she gave it another go, pointing herself downhill. Wobble, wobble, and she was sort of riding! 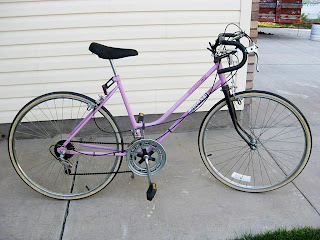 We said, “Hey, let’s go to the Wee Store!” since it was the only destination of interest that was also located completely downhill from her house. I ran in front of her to watch for traffic, but I wasn’t very effective being blinded by laughter. Either the breaks didn’t work very well or there weren’t any, so at the bottom of the hill she sailed through the stop sign, gradually slowing on the flat of the street. The kickstand was barely still attached, so we laid the bike down on its side then entered the Wee Store to buy Cream Sticks.

They were a favorite snack of ours—maple doughnuts with whipped cream interiors—that our parents could never know about. Normally we’d split a 2-pack, eat it in the walkway between the store and the house next to it, then pass out on the cement with nausea. It would take about 10 minutes for our strength to return. But this time we got the 12-pack Family Size because we had a bike to carry them on!

Annie hung the plastic bag around the front handles and we headed back towards her house, planning to devour the whole pack in an abandoned bus stop near the cemetery. We knew the return trip would be arduous, so we took a different route that was longer but less steep.

She had to stand up on the pedals to get momentum and the more she swayed her weight back and forth, the more the bag of Cream Sticks swayed. About ¼ of the way of the first hill the bag swung into the spokes and was ripped from the handles and run over by the back tire. It also tipped Annie over so that she had to put her left foot down to catch herself. We rushed to the bag and beheld absolute Cream Stick carnage.

Running doubled-over to the nearest yard, we collapsed screaming. Then we whipped the exploded doughnuts all over the place from where we sat. Into bushes, onto the sidewalk, against the tree. I don’t remember how long it took us to regain enough composure to walk, but somehow we got home with the bike because I’m in L.A. now, not in that Cream Stick-strewn yard.