The school secretary was round and glossy. She was also Caucasian. Her name was Pearl, and she loved that fact. Her pantyhose went swish swish swish as she shuffled around the office. She wore a pouf of light violet hair hair-sprayed into a nice grandma helmet that rung hollow when you knocked on it. Pearl was old: very, very old. Way older than my parents. She was like 50 ... or 90.

When I say Pearl was glossy, I mean two things:

1. She had HUGE glasses that could catch a glare in the dark, and

When women age they get wrinkly. I think it’s better not to highlight the biogases out of your decaying features. (‘Biogases’ was the suggestion Word gave me when I tried to spell “begeezus.”) Honestly, it can become grotesque, clownish even, when women feverishly fend off fate with cosmetic weaponry. I’ve heard that old women go so overboard partly because their vision is diminished. This goes for the sense of smell as well—that’s why you can smell Essence of Doily seven pews back in church.

And it wasn’t merely the lipstick. There was the rich rouge, the thickly-penciled brows, and the chalky powder that ended sharply at the jaw line, like a map’s political boundary (except the one between Israel and Palestine, which is shifty.) We tried to avoid making her laugh as this threw the brightly painted facial parts into an over-stimulating circus act. 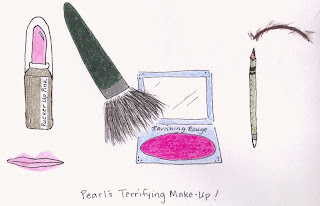 Pearl wore pearls every single day. That way, when visitors came to the office she could mime her name by lifting up the string of pearls with her thumb and a wink. She loved this little move. The look of delight on peoples’ faces when they “got it” thrilled her more than she could conceal. So she’d let out a little “hee hee hee,” bobbing her head back and forth to the syllables.

She loved hearing her name said aloud. As she took care of the office she’d be reasoning things out and encouraging herself with little gems like, “That’s right, Pearl, we’re going to call Mrs. Johnson back, and then, Pearl, let’s take our lunch.” Or, “Great work, Pearl, you typed that memo without any errors, and you didn’t get uppity, Pearl, with teacher who took out her headache on you!” Her name was priceless, and with every utterance of it her self-esteem grew. 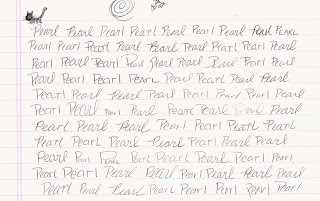 This was a page from her memo pad.


Then one day this happened:

She swished past the visitors, out of the office, and into the girls bathroom to have a good cry. After that she wore a name tag and a mantle of dejection.

Old people’s wounds don’t heal quickly. Nevertheless, Pearl refused to get a new wristwatch. The one she wore every single day pinched the biogases out of her delicate wrist skin, but it had great sentimental value.

Earlier I said that her glasses were so large that they could catch a glare in the dark. That was hyperbole. I have never seen Pearl in the dark. But I’ll tell you the truth now: her ears were so sensitive to the mention of her name that upon closer inspection they turned out to be itty bitty satellite dishes! She’d jolt upright to hear little girls walk past the office saying something about “there’s not much curl in my hair,” and big boys fighting about who “got to unfurl the flag” from the pole. She even mistook a teacher reminiscing about his “rural upbringing” as a sweet sonnet to her name.