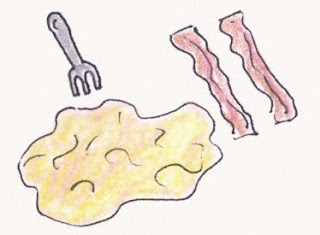 Miss Capillaro flew a single-engine plane and had a monstrous forehead vein. It pulsated when she ate scrambled eggs. Maybe it beat out a rhythm to other foods, but I only ever saw her eat scrambled eggs. She was our 5th grade teacher, and boy did she make an impression—some would say a scar.

Her first name was Bonnie, but she couldn't have been less so. Out of earshot we'd call her Bonnie the Terrible or The Capillaro, but to her face it was always "Miss Capillaro, Ma'am." Zero tolerance for disrespect had she. When you were asking or answering a question she required you to stand to address her. If you forgot, she'd look around at the ceiling and under her desk, saying, "I'm sorry, is someone talking?"

Unfortunately, she had a lazy eye, which made you think she was always suspecting you. One time she threw a history book at Garret Miller as he exited the classroom to sit in the hall for doing something that peeved The Capillaro. Her catch-phrase to order kids into the hall was, "There's the door!" The book was boring and heavy and narrowly missed him. On occasion she wouldn't even lower herself to speak to you; she'd just point at you, then point at the door.

But she loved leading worship! Every cupple-a-days she'd pull out her 12-string acoustic guitar, strap it on, and start singing songs. We were expected to join in. One time I was able to forget about her and my classmates and dissolve into the music with my eyes closed and everything. At lunch that day Michael and Becky saw me coming to the table and started posing like me when I was singing. They had not dissolved into the music; they had sat under their desks snickering. They thought they were soooooo funny. 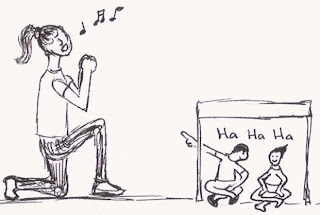 Miss Capillaro had told us her heartbreaking story about how her first guitar was chintzy and had rusty strings that made her fingers bleed. Nevertheless, she practiced on it day and night, finally graduating to the beautiful specimen she plays today. It was supposed to inspire us or something.

Working at a small Christian school "pays peanuts," she informed us. That's why she waitressed on weekends—to support her expensive piloting habit and egg tooth.

Next time I'll tell you about the winter trip we took that year to a place called Wintersville, a mountain retreat center. Or maybe I'll just tell you now since I only remember two things about it.

One is that when it came my turn to be a gopher, I dropped a huge chunk of butter on the dining room floor. It just stuck there, standing up. I thought it was just about the funniest thing in the world. Who knows, maybe it was. Each day 3 kids and 1 adult would be assigned as gophers, which entailed duties like doing dishes, running errands, and polishing the white man's shoes. I think Bonnie even took her turn with the brillo pad.

The other thing is that one night we were all gathered in a meeting room at the bottom of Wintersville, listening to Miss Capillaro teach a lesson. All of a sudden THE DRY ERASE MARKERS RAN DRY!!!!!!!!!!!! She quickly surveyed the room with her hawk eye. It landed on me.

"Grablatch, run up to the girls cabin and get my extra ration of markers. We'll time you. How long does everyone think it will take her to get there and back?"
People guessed.
"OK, 8 minutes. If you beat that, you're off gopher duties for the rest of our stay."

I bolted out of the room into 3 feet of snow, plowing up the mountainside to the cabin. I was impervious to the cold and wet, my entire being lasered on the markers as the timer ticked in my earmuffed ears.

The cabin door was locked. I tried the side door. Locked. I flew back down the mountain and burst into the warm room with time to spare. But markerless. It turns out that the cabin door was open; I just didn't grip the knob well with my mittened hands. In all her magnanimity, Miss Capillaro gave me a caramel for effort and kept me on gopher rotation.