That’s how I learned Spanish from our phenomenal, blind polyglot.

Señorita Holmes was fluent in seven languages and their Braille counterparts. The local newspaper wrote up an article about her and everything. We didn’t appreciate her in elementary school. We were bad instead, because she couldn’t see us.

It’s shocking how well her hearing compensated for her poor eyesight--she could hear a kid stick out his tongue! “Silencio, por favor!” she’d say, exasperated. We’d giggle. Then a monitor would come in to make sure we weren’t taking advantage of her.

Apparently she wasn’t totally blind, like when you’re in a dark closet hiding from your drunk dad what? I mean, she told us she could see light and dark, and if she held papers up to her face, she could see their shape. I guess that explains why she wore glasses. I had thought it was very strange that a blind person would wear glasses. Then I found out about what I already just said.

She was open to us asking her questions about being blind. One time we asked what her dreams were like. She had been blind from birth, so she said she didn’t have pictures of things in her mind to recall and dream about, so her dreams were more shadows and sounds. Maybe like talking shadow puppets.

We asked her how she knew her clothes matched. She had a system of sewing little tags into them to know what colors were what. I guess someone had told her which colors complement and which clash. I remember this one sweater she had with a big mallard duck over the whole chest. She wore a turtleneck under it with a long, denim skirt. I really liked that duck.

To learn the parts of the body we’d play Spanish Simon Says. It was called “Señorita Says,” and it was on the honor system.

One year we found out that Señorita Holmes was about to become Señora Jones. Another blind multi-linguist had proposed--in nine languages! She said, “Si! Muchas Gracias!” to him nueve times even though she didn’t know for sure that he was proposing in dos of them. She was feeling muy bien about it all.

Her seeing eye dog was a golden retriever named “Moose.” We thought that maybe she named him that because of his size, but it was actually because it had antlers. Moose saved her life by barking at the smell of smoke and pulling the covers off her bed. They got out just in time before el nuerte. So it was very sad when Moose died. She got another dog but didn’t talk about him much. She still missed Moose.

For one class we were in a different room because Plugger, the school janitor with magical keys, was shampooing the classroom rug. No monitor was available that day, and the freedom drew the poison to the surface of our souls. Marky Keever found in the corner of the new room a big ol stick with a banner, like they carry in parades. The banner had a Mickey Mouse head and the words, “Rat Patrol.” No one knew what it was or where it came from, but it was just begging to be marched with. So Marky grabbed it and marched. Boy his knees went up high! A couple other kids formed a conga line behind him.

Señorita Holmes heard measured steps walking around in unusual patterns. She stopped the lesson on “Lunes, Martes, and Miercoles,” and demanded to know what was going on. We looked around at each other, trying not to laugh, but also a little nervous--no one had done anything this disrespectful before.

“What’s going on!?” she asked loudly.
Someone said, “Uh, nothing,” then glared at Marky to stop.
“What is happening?!?!” she said with a shaky voice. She was fumbling around on her desk to find something, knocking papers onto the floor.
We’d never seen her this upset. Marky put the flag thing back and sat down. Señorita Holmes also sat down. She started to cry.
“Why are you doing this? Why are you doing this?”

We were scared. For the remaining minutes of class we just sat in silence, pulling at scraps of paper stuck in our notebook’s spiral. The Señorita continued to pose questions, but softly and to herself.

The bell was relieving.

We were all rats that day. Ratas. 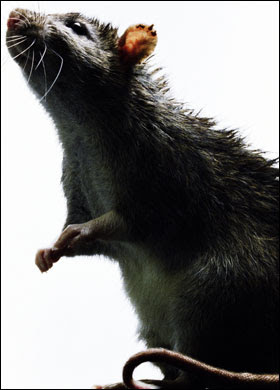