Every Friday was “Chapel.” Girls had to wear a skirt or a dress, and boys had to wear a tie. I would rather have worn a tie because you can still play kickball at recess with a tie. In a dress you can only play with those banana-shaped scoopers and a wiffle ball.

One time Bobby protested the girls getting to wear “culottes” (shorts that look like a skirt) by wearing them himself! In general, the dress code was no jeans, no tennis shoes, and no T-shirts with words. The school board said it caused jealousy among students. And they’d rush to point out that these restrictions were better than having uniforms. Everyone agreed.

Not only did these ingenious lyrics teach us to spell, they also left room at the end of each sentence for us to scream, “Not!”

I hated standing up to sing. My back would hurt, and I’d get lightheaded. Later in life, at Dick’s Sporting Goods, I’d find out from a footwear associate that my arches pronate! Out of necessity I invented a way to stand and sing that made it physically more tolerable though socially more damning. This is how I stood: 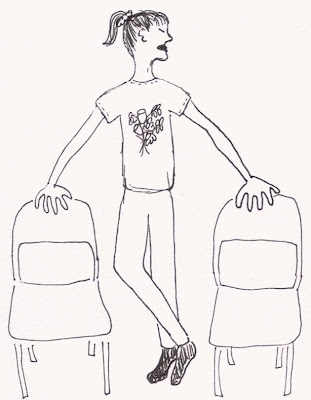 I still stand like this when I’m in line at the grocery store and don’t have on my special corrective shoes.

Pastor Joe gave the sermons after we sang a few songs. The sermons usually started out with an “object lesson,” which took some thing that kids are familiar with--like a baseball card or a cornhusk doll-- and made an analogy to something about God.

Alls I remember about Pastor Joe is that he always sounded thirsty and had a good head of thick, black hair. He was part of a clerical dynasty. His brother was the high school pastor, and his dad was the senior pastor who said, “In closing” ten times during his interminable sermons. I developed a deep mistrust of him.

My favorite puppet was a small, gray mouse named “Bomber.” The puppeteer would throw Bomber all over the room--into the audience, against the wall, up to the ceiling. We loved it. One time Bomber got stuck on a nail high up on the wall. We almost died laughing. The puppets that looked like people were boring. They were usually telling us what to do. During those parts we’d put pieces of paper in the hoods or hair of kids sitting in front of us. But the hair had to be the right texture for it to work. For example, we couldn’t put anything in Cara’s hair because it was so lustrous.

Sometimes there would be a skit, put on by kids in 6th-8th. In one of them Courtney Briggs was personifying envy by painting her face green, sticking her nose up, and putting a hand on a jutted out hip. It was funny, and if I knew the word at the time, I’d have said it was ironic, because everyone thought Courtney was stuck up. I’m not sure if she really was or if she just wore really nice sweaters. Her dad was always picked to play Jesus in the church’s Easter cantata even though he had blond, balding hair. He got to ride a donkey down the sanctuary aisle.

Another time Rachel Goldsmith sang a song from a Christian video series called “Psalty the Song Book,” which starred Psalty, a giant blue Psalter. The song was called, “He’s Still Workin’ on Me,” and it was a crowd favorite. But by the way Rachel reached her hand out to the audience and raised it up dramatically for the high notes, it seemed that she thought God was pretty much done workin’ on her. She was in 6th grade, and I think her parents were teaching her those moves and pushing to get her a record deal. Her curls were wound so tightly that her scalp was torn in a few spots. It was too much pressure for her.

“Close your eyes, bow your heads, and let’s pray.” Close my eyes? Yeah right! Praying was the perfect time for bullies to make a stealth assault. (If the victims said anything or made a scene, they’d get in trouble for irreverence.) Kids would put spit balls in your coat pocket or pinch your trapezoids. So we’d sit vigilantly, with our heads bowed, ears alert, and eyes wide, just waiting for the “And all God’s children said?” 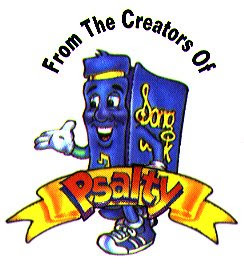